He was like a stretched bow or a coiled spring every minute,
witty, swift, ebullient, sarcastic. He was a famous engraver....
And his face seemed engraved rather than sculptured in flesh.
As if every line he had engraved on his copper plates he had at
the same time engraved on his face. Anaïs Nin (1940) (4)

After attending Whitgift Middle School in Croydon Hayter left school to work as a research chemist in the laboratory of the Mond Nickel Company. Concurrently he was enrolled as a part-time student in chemistry at Kings College, London.

1918
At the end of WWI, Hayter left his job at Mond Nickel to become a full time student at Kings College.

1921
Hayter subsequently graduated from Kings with an honors degree in chemistry and geology. He continued to do research into organic sulfur compounds under Prof. Samuel Smiles at Kings College until 1922.

1922
Hayter accepted a job with the Anglo-Iranian Oil Co. and was sent to Abadan where he worked for four years. During this period he began a series of pencil portraits of Anglo-Iranian personnel of which about 150 were completed. Painting of this period are mostly landscapes, rivers, seascapes, boats and the oil refinery plant.

He had already begun to paint and to make prints in his spare time and had determined to become a professional artist at the termination of his Persian contract. The scientific background in his career is evident in his grasp of all the technical problems of engraving and in the fertility of invention he has shown in devising new means of expression. It is also to be seen in his writings about art, in which it appears that he has inherited a penchant for the analysis of perspective, form and color from Charles Hayter, as well as his artistic leanings. (6)

1925
At this time Hayter suffered an attack of malaria and was sent home to England.

The Anglo-Iranian Oil Co. arranged a one man show at their corporate headquarters and almost all of the paintings were sold. This show may have been the determining factor in Hayter's decision to become a professional artist.

Hayter moved to Paris close to Giacometti's studio. In the beginning he spent several months studying academic techniques at the Academie Julien. He made friends with Giacometti, Balthus, Calder, Anthony Gross and Joseph Hecht.

He began to work in Hecht's studio and was introduced to engraving on copper at this time.

It was particularly significant for Hayter's development that Hecht should have been an advocate of the use of the burin, the original and classic tool of the engraver. With it the copper is attacked direct and it was this immediacy of approach which Hecht practiced, and to which Hayter readily responded. He soon discovered, in his own words, that 'the burin is a kind of plough which goes ahead of the manipulator in an exploratory and inventive way and not behind him.' He has always drawn attention to the importance of using the resources of the subliminal mind and the more automatic processes which underlie our conscious reasoning, and has written about the place of these in his own creation. By the partial abandonment of the will the burin on the copperplate becomes in his hand a sort of ouijaboard, drawing to the light ideas and forms which otherwise might not become apparent to the artist. (7)

He exhibited work at the Salon d'Automne.

1927
Alice Carr de Creeft (wife of sculptor Jose de Creeft) came to Hayter with a friend to buy prints. A week later they returned and asked him to teach them printmaking techniques. Intending to discourage them, Hayter said that he didn't have a press or the equipment necessary to teach them but if there were two more people interested in learning, he might consider it.

A week later they returned with two others and persuaded Hayter to set up a workshop.

When I met Hecht in 1926 I was very strongly impressed with the latent possibilities of his manner of using the burin and later, realizing the necessity of collective work in a group in order to develop these and other possibilities, I set up a workshop where all equipment was available for artists who wished to work in those media. (8)

Hecht helped him get his first press and by the end of 1927 there were ten people working in the atelier. It was moved to a larger location at the Villa Chauvelot where it stayed until 1933.

1929
First one man exhibition in London at the Claridge Gallery.

He began to exhibit with the Salon des Surindependents and at this time meets Joan Miro, Hans Arp and Yves Tanguy who begin to work in Hayter's atelier.

He began to exhibit with the surrealists in 1929 and became the friend of a number of leading members of the group, among them Miro, Arp and Tanguy. These associations and his own predilections become increasingly apparent in the work which he produced during the 1930's. The poetry which can be produced by the juxtaposition of disparate ideas is especially to be seen in the plates from the album L'Apocalypse published by Editions Jeanne Bucher in 1932. This set of six engravings has an apocalyptic text by George Hugnet. Unlike most French illustrated books the engraving were not created as illustrations to the text; the poet, who has shown himself adept at following the convoluted forms created by his friend's imagination, wrote his preface as a commentary on the engravings. (9)

1933
Hayter's print studio was moved from Villa Chauvelot to 17 rue Campagne Premiere where it remained until the beginning of WWII. This location was very near Montparnasse, one of the liveliest artists' quarters in Paris.

Hayter exhibited with the Surrealist group in Paris in 1933 and continued to exhibit with them throughout the 1930's. He left the movement when Paul Eluard was expelled. Eluard's poem Facile Proie (1939) was written in response to a set of Hayter's engravings. Other writers with whom Hayter collaborated included Samuel Beckett as well as Georges Hugnet. 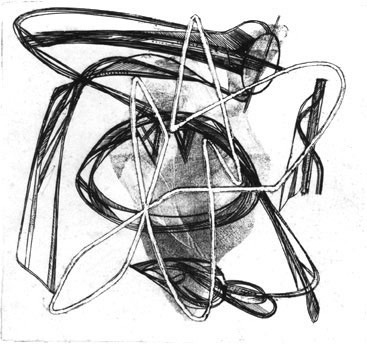 This engraving and softground etching foreshadows the "automatic" side of Hayter's work which is seen more clearly later on.

Graham Reynolds, in his 1967 monograph, The Engravings of S. W. Hayter, views this print as a significant milestone in Hayter's development of image:

In 'Oedipus' of 1934 the results of experimenting in Atelier 17 can be seen in a whole series of new devices. The theme of Oedipus as the riddle solver is here given effect not only by the elaboration of three dimensional form through the linear patterns of the burin, but also by a white line channeled out of the copperplate and by the palm print of the artist's hand impressed through a soft ground to form a background texture on the plate. The artist remarked in About Prints, 1962, that it is probable that "the first print observed by man was his own footprint or hand print", and that it had a magical quality as an expression of his identity. He has also drawn attention to the mysterious effect of white line in relief in an intaglio print. Though it stands up above the surface of the paper it appears to recede in part from the spectator's eye. In this counterpoint of form and line there seems to be a veiled allusion to the place where three paths cross which lead to the discovery that Oedipus killed his father.

Atelier 17 held the first two shows of prints done at the workshop at Galerie Pierre (Loeb) in Paris and Leicester Galleries in London. In 1936 Hayter helped to organize the first International Surrealist Exhibition in London.

From 1934 to 1939 Hayter was in frequent contact with Picasso and gave him technical assistance from time to time.

According to Rosamund Frost in a 1941 Art News article (10) Picasso had a large selection of Hayter's work and they used to exchange prints.

Hayter executed a number of paintings and prints inspired by the destruction and inhumanity of the war in Spain.

"Combat", an engraving with soft ground, is a print of this period. This print has been compared with Picasso's painting "Guernica" which was painted the following year.

Hayter was invited by the Ministry of Arts of the Republican government of Spain to visit that country. He slipped across the border with safe conduct papers. This visit to Spain made a lasting impression on him.

On his return from Spain Hayter accepted an offer from Ambroise Vollard (the collector, dealer and publisher who had given Matisse, Cezanne and Picasso their first one man shows) to make a series of prints for publication based on Numancia by Cervantes. This was a tragedy based on the destruction of a Spanish city by the Romans in 133 B.C.

The stricken and excoriated female river Goddess 'Douro' is one of the symbolic figures to appear in the play, in which she addresses her lamentation for the city on her banks to Spain in a movingly patriotic outburst. (11)

When Vollard died in 1939 the portfolio was incomplete and the prints were edited individually.

1939
At this time the war in Spain and the approaching war in Europe were the main concerns of many in Paris. Anaïs Nin recalls the following from the spring of 1939:

Refugees from Spain began to slip into Paris. The laws were rigid: if one sheltered or fed them there would be a punishment of jail and a fine. These were the fighters, the wounded, the sick. Everybody was afraid to help them. William Hayter hid them in his studio.... I was busy cooking gallons of soup, which had to be brought in small containers to Hayter's studio. (12)

Atelier 17 was abandoned (with all its contents) in September, a day after war was declared in Europe. Hayter, a member of the British reserves, returned to England where he collaborated with Roland Penrose, Julian Trevelyan and others to organize a camouflage unit using the results of his research in Spain after witnessing the bombing of Madrid.

He has not only set up his own Camouflage Engineering Company (in which the Government has lately taken a rapt interest) to further the experiments started in England, but is acting advisor to the Museum of Modern Art camouflage section in their "Britain at War" show scheduled to open late this month. He has constructed for them an apparatus which can duplicate the angle of the sun and the consequent length of cast shadows at any time of day, and day of the year, at any given latitude. This complex of turntables, discs inscribed with a scale of weeks, allowances for seasonal declination, and so on is just the kind of working mathematics he really delights in. (13)